Getting Crabby Around Here 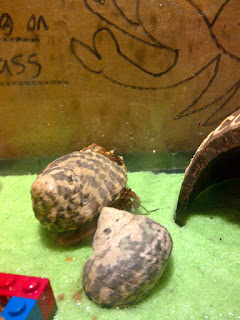 They are our new resident hermit crabs. I suppose that officially makes them part of the family now.

Boy is so thrilled to have his very own pets. He has read, re-read, and re-read again the care instructions that the college aged girl gave him at Pet Smart.

George is actually kind of shy. Bill, on the other hand, has no problem coming out of his shell. He has already tried out his pinchers on Bug's little finger. He was very lucky she dropped him on a soft surface and didn't toss him after he hurt her.

Boy claims that they're not just ordinary hermit crabs. Nope, they're secret agent hermit crabs. Why else would they only come out at night and stay hidden during the day? When they're not planning they're next mission inside the coco hut, they're hanging from a branch on a tree in their crab habitat that Boy created for them.

He made them their very own special food box using his legos. You can kinda see the corner of it in the photo. I'll have more photos to share shortly. Boy's been planning on video taping them at night since he never sees them out of their shell during the day.

And no, hermit crabs are not really hermits. They actually don't like to be alone, and they do much better when they have a friend or two to room with.

Perhaps that is why Boy choose these crabby critters for room mates. Being the only male sibling, you'd think he'd love it having a room to himself, but he was lonely and now he has crabby friends to keep him company.

Receive Your 15% off Coupon when you