Boy got the first issue of his new Lego magazine last week. He loves Legos and this month's issue featured some projects for Christmas. I didn't have anything Christmas related to use as a photo prop for my holiday features so he made me a Christmas stocking out of Legos for in my new photo shadow box. 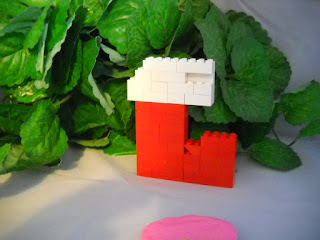 I'm so proud of him. He doubled the pattern in the magazine in order to make the stocking twice as large. He came and told me it was like a batch of cookies and doubling the recipe. He's definitely a smarty in math like his Papa.

And he told me I can keep all his red lego's until after Christmas. Wasn't that so sweet of him?
Posted by Unknown at 9:07 PM

Receive Your 15% off Coupon when you